Aaaah, breathe deep. Do you smell it? That’s the scent of clean. Spring clean.

We’ve gotten the spring cleaning bug in our house. It started as the need for more space in our garage, for my growing pile of art fair booth stuff and for my husband’s new model train modules. So the rearranging commenced. But you can’t rearrange without some reorganizing and cleaning. And that sorting and organizing and downsizing has spread its way into other areas of our house, including my art supply cabinet.

And guess what I found in there… Items that I purchased when we were living in Italy, to giveaway on my blog! Apparently I never gave them away while there, they were shipped home from Italy with all of our stuff almost three years ago, I stashed them in my cabinet and forgot all about them. Yikes!!

So guess what I’m doing today? I’m finally giving these away! Plus, I found the Photojojo lens set that didn’t work out for me, and I’d love to see these go to a good home, where they might be used.

Here’s what I’m giving away by random drawing to four lucky winners: 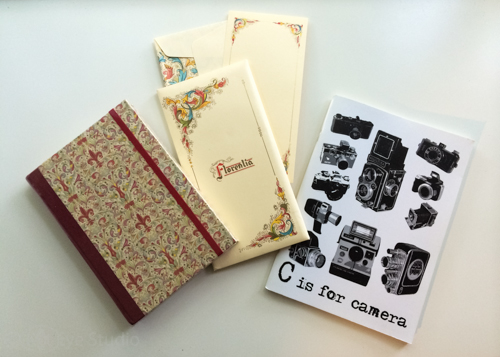 One lined journal, covered in my favorite Florentine paper design.

One set of gorgeous Florentine cards and envelopes.

One blank notebook, with “C is for Camera” and vintage camera imagery on the front.

One set of Photojojo lenses and case. What’s included is what is shown: Telephoto iPhone lens and cover to attach it to an iPhone 5/5S, a set of three Photojojo lenses (FishEye, 2x Telephoto and Macro. I’ve lost the wide angle lens and cover that screwed onto the macro.) plus magnetic rings for attaching to any camera, and the Lens Wallet to store them. These are used and come as-is.

All you need to do to enter the drawing is leave a comment here by Monday, April 28 at 12:01AM EST. I’ll draw the winners at that time and announce them on my blog on Tuesday, April 29. Please, only one comment per person and indicate in your comment if you can use the Photojojo lens set. I want to make sure that goes to a person who can use it, so if your comment doesn’t say you can use it, you won’t be eligible to win it.

Thanks for your help in getting these items out of my house! Spring cleaning seems awfully fun this way, doesn’t it? More like a celebration than work. 🙂

There are three things that are sure signs of spring in our house: My son’s birthday, tulips in bloom and taxes.

My Saturday was filled with all three. First I was up early for a sunrise shoot at the tulip fields in Woodburn, Oregon. Too bad we never saw the sun! It rose behind clouds, leaving us with a rainy, overcast morning. Fun, but wet. I’m still going through my photographs for the best ones.

Then home, to my son’s 13th birthday. Yes, I have a teenager now! The afternoon was filled with teen boy energy, taking his friends to the First Robotics competition and then out for birthday ice cream. And filled with texts, lots of texts. Unlimited texting on his phone was our gift to him this year. It was fun to see his excitement as he heard that little chirp of the text coming in.

And then… Taxes. I had been dreading doing my own taxes this year, partially for the work and partially just for the unknown nature of what I would owe. This year was the first year since before Italy that I was on the hook for doing my own taxes, the company wasn’t doing them for me because of all sorts of craziness that happens with working internationally. Things have changed in our tax situation and I didn’t quite know how it would pan out. But, for all of my fears of what it would be, it came out ok. Whew, a sigh of relief.

Which made me think… All of this pent up dread and fear that I was carrying around the last few months as I thought of the taxes, both the dread of the work and the fear of outcome, and it was all for nothing. The work wasn’t that bad, just a few hours in total, and the outcome was fine, not significantly different from what it’s been in the past. After it was done, I felt so much better. I felt back in control, understanding this was mine to own and affect. I could make changes to affect the outcome, rather than sitting back and allowing it to happen to me.

How many other areas in my life am I carrying around unfounded worry? Are there places where, if I faced my fears sooner, I could leave all of that angst behind and create a better outcome for the future? Because all that worry was wasted energy. Completely wasted and misdirected. This experience was a little reminder that it’s better to face the unknown and take ownership, instead of turning my head away and avoiding it out of fear. Even if my worst fears had materialized, at least I would KNOW what the situation was and then could move on. I would be in control, making decisions on the next steps to change things in the future, moving myself ahead. Not stuck in that horrible place of inaction filled with worry, dread and fear. Blech, I don’t want to be there anymore. It’s time to take stock and make sure I’m not in that place with anything else in my life right now.

It’s yet another life lesson, found this time in one of my sure signs of spring. Next year I plan to skip the whole dread and fear part, move the taxes up to winter, and just enjoy the tulips and the birthday this time of year. I think that will be a much better way to celebrate spring.