It’s so amazing how the human brain works. As I’ve studied silhouettes over the last few weeks, certain images from my archive have come to mind. I haven’t seen or worked with some of these images in forever, but the memory of them pops up and I have to go find them.

Today’s image is one I had to go digging for, because my brain would not let it go! Looking out over Verona, this arch in the arena was a perfect frame for the scene, capturing my husband and son in silhouette. I like the juxtaposition of the old and the new, a unique portrait of our visit to this place. 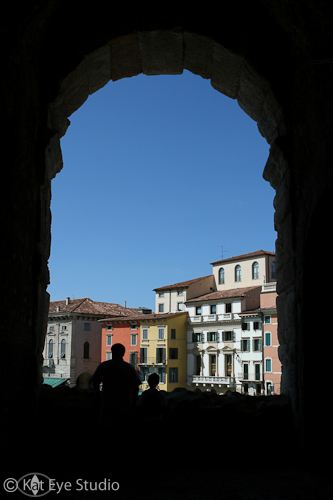 If you ever visit Italy, don’t miss Verona. Not only is it in the Veneto, my favorite region of Italy, it also had my favorite Roman arena. Oh, I know, the Coliseum in Rome was the biggest, but the one in Verona is the best preserved. You can walk in it and through it and sit on the marble seats that are two thousand years old. They still have performances here, although we were never able to time it right to see one. This arena is living history, the best kind in my book. 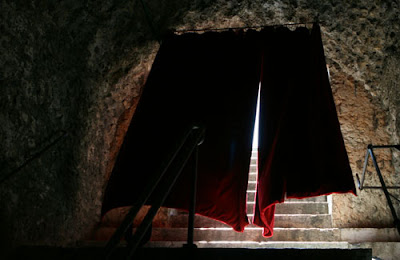 Time for another exploration! This time of a subject: Thresholds. By “threshold” I’m not referring to any technical term, but a physical place. A place where you cross over, from one locale to another, whether real or imagined. Threshold images are not merely images of doors or gates, but they are of portals that transport you to somplace different in your imagination.

The photo above is an example of the type of “threshold” I am talking about. This image is from the Roman Arena in Verona. When I look at it, I get a sense of time travel. In my imagination, if I walk through that curtain, I will be transported back to Roman times. There is a magical quality of the unknown on the other side of that curtain. It beckons me to come through.

Here is another, of a gate to Parco di Monza near my home. This image gives me the feeling of looking into another world, some sort of magical winter wonderland. The gate is merely the portal, the threshold to this place. I want to explore down that path. 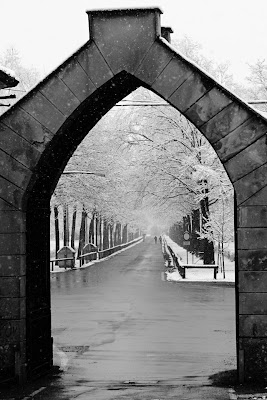 And here is a threshold that I captured that has become sort of an anti-threshold to me. One that I don’t plan to pass through. You see, later this year I turn 40 years old and I started looking for places with the address 40 to capture my threshold. This image is from the island of Murano in the Venetian lagoon, one of my favorite places on earth to photograph, but this is one of the most depressing images I have photographed there. After I reviewed and edited it, I realized that is not my 40 threshold at all – there is no hope, no happiness, no creativity in this threshold. It’s pretty bleak and closed off. It showed me that I have no problem with turning 40, that I reject the idea that this milestone is a bleak thing. So there is power in that too – I began to imagine what my internal 40 threshold looks like and it’s nothing like this. 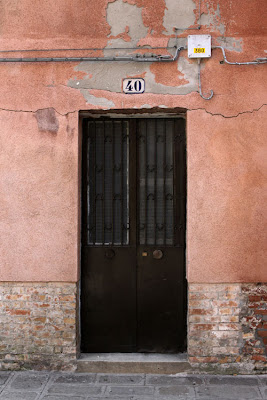 To capture a special threshold image, here are some tips:
1. Look for doors or gates that have some contrast in what is behind versus what is part of the wall or structure the opening is in. This could be a contrast in light or in scenery. The greater the contrast, the greater the opportunity for the “threshold” feeling.
2. Try getting in close to the threshold. By cropping in close on the opening so you don’t see what is surrounding it, you create more opportunity for creative story telling because there is not as much physical “place” presented to distract the imagination with reality.
3. Look for openings that are not fully open, that just give a hint of what is behind them. This will give a tantalizing, magical feeling. In this case, the imagination is not distracted by the reality of what is on the other side of the threshold, but is allowed to go wild.
4. Look for thresholds that have meaning to you, whether it’s the address number or the physical place or the imagery you find there. Later, take some time to examine that image to see what meaning you find. Does the image match your imagination or feelings? Why or why not? Can this threshold be useful to you to learn something about yourself?

Photography, like any art, is symbolic. The images we capture have meaning, whether or not we know it at the time. Explore the world around you with the idea that there are magical thresholds available to you all the time, and share what you find! Post a link to your photo here in the comments or join the Flickr group set up for my Exploring with a Camera series. 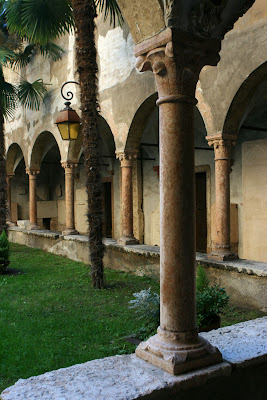 This courtyard is in an abbey in Verona. Again, more arches. But also of note are all of the courtyards. From the outside, the street view, many cities just have sidewalks and buildings and streets. But once you get inside, it often opens up into these wonderful courtyards. Hidden little places of beauty with greenery or fountains, the ability to get some outside air and sunshine in a nicer environment. Buildings have courtyards, cities have piazzas for the same thing. 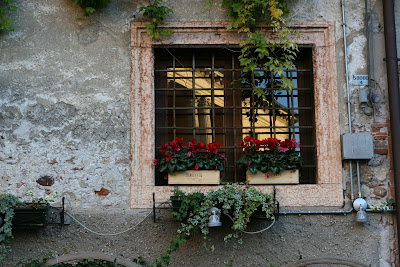 I love window shots. I especially love window shots here in Italy. Just look at this window. Imagine it without the flowers and plants – it’s just a barred window at the back of a building, by a parking lot with all of the electrical boxes. Ugh. But add a couple of window boxes (creatively made of wine boxes, no less!), some draping vines and you have a beautiful little garden scene. Still at the back of the building, still with a parking lot right next to it, but you don’t notice that! Window art, for sure. 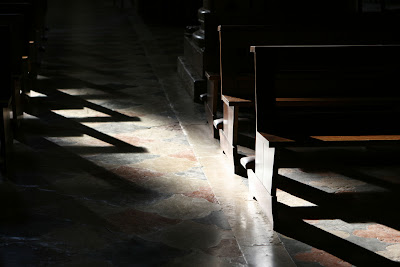 We’ve seen a lot of churches here in Italy. Some are giant, some are smaller. Almost always overwhelming, you can’t take it in from one angle or without craning your neck up. Most are dark inside. Beautiful stained glass windows catch your eye and it’s nice and cool on a hot summer day, but otherwise dim and uninspiring in my opinion. I need the light. Except, for this one day in a church in Verona, where the warm afternoon light was coming in and illuminating the pews. Beckoning the visitor to sit down in the light and ponder the nature of our existence. Or at least, capture the beautiful light and shadows it creates. That’s my personal kind of pondering. 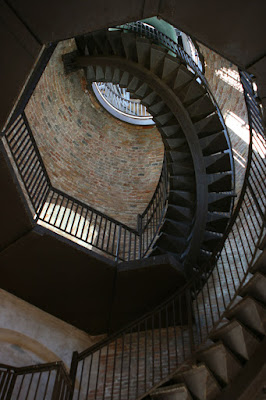 This photo is all about moving lines. I love the swirl of the stairs up the tower. I didn’t love climbing them, however! These steps are in the Torre dei Lamberti in Verona, and Laurie and I climbed up the 368 steps to the top of the bell tower. We were rewarded with a fantastic view of Verona, and the need for a rest when all was said and done.

By the way, my haircut came out great! See my new profile photo for the result. One of those “I should have done this a long time ago” things.