Welcome to Exploring with a Camera! This next couple of weeks we are going to be Waiting to Click. As always, I have a lot of ideas to share with you in this post and then there is a link up at the bottom for you to share your images on the topic. You can also share your photos in the Flickr pool if you are interested in being featured on the blog.

There is so much of our world that is changeable. When you tune in to it, you begin to notice the ebb and flow of life around us. “Waiting to Click” is about being aware of the changeable things in our environment, predicting what is going to happen and then waiting to capture the image we’ve anticipated. So often photographers talking about being ready, having the camera with us and available to shoot, in order to capture a fleeting moment as we see it unfold. Waiting to Click takes the readiness a bit further, adding a bit of both prediction and patience into the mix.

To get a great image by Waiting to Click requires your active participation. Here is what you have to do:

Now let’s see a few examples of Waiting to Click, to further explain what I mean…


Vehicles of all sorts are always moving around us, when we are out and about in the streets. You may recognize the lead-in image for this post as another in my emerging market/wheels series, and the capture of this shot is a great example of Waiting to Click. I saw this image across a very busy street in Siracusa, Sicily. I paused for a while and watched the traffic flow. There were a few moments in each traffic light cycle, where the cars passing by on the street cleared out just long enough to photograph a few frames. While traffic was going by, I looked at possible angles and compositions, and situated myself in the best spot for the image I envisioned. I waited for the next traffic light cycle, and the moment the cars cleared out, I got the shot.

In some cases, you want the moving vehicle in the shot, like this one of the Milan subway I captured with my iPhone camera. This was my first outing with the camera, and I was just getting used to the delay. I was fascinated by the crowd on the other side of the subway platform and thought it would be a great shot to have the crowd behind the train pulling into the station, so I practiced with a couple of shots of the crowd to get the framing and camera timing down. Then, when I heard the train coming, I was ready to click as soon as it entered the frame and captured the image I wanted. 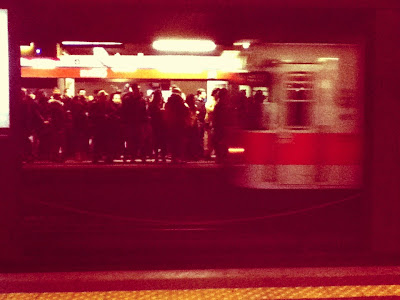 The light this particular evening in the Venetian Lagoon was spectacular. I took several images of the sky but knew the shot would be more interesting with a boat in the foreground. I had my exposure and composition dialed in, it was just a matter of waiting for the right opportunity to come along. When this boat came by, I was ready and waiting to click. 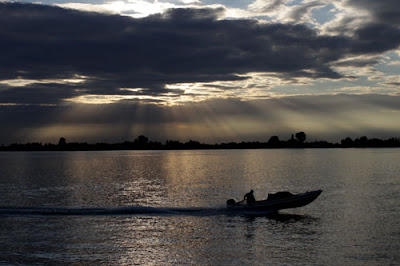 
We are often surrounded by our fellow human beings, and depending on the shot you want, that can be a good thing or a bad thing. You might think that Europe is an empty place, from my photographs. I really love to capture an empty street or place, to allow the viewer room to imagine themselves in the frame. To do this, I often have to wait for a lull. Just like cars, the flow of people will change, but it’s less predictable. Here is another in my market/wheels series, captured in Bologna. It looks like this was a deserted street, but this was a busy Saturday afternoon, the weather was nice, and people were out on the streets in force. I used the times when there were people coming by to set up the shot and play around with composition. When I found the image I wanted, I waited for the people to leave the frame, and clicked. 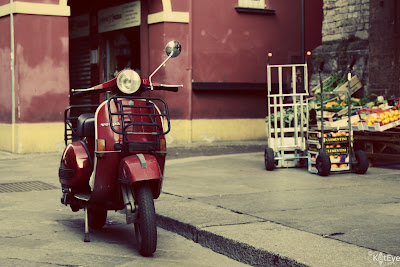 Here is another image where I waited for the frame to clear, with the exception of the people seated on the left. Evening at the Roman Baths in Bath, England is certainly quieter than the day, but there were still many people wandering around and listening to their audioguides. (I’ve learned to dislike audioguides – people stand immobile for minutes on end gazing at something while listening to the commentary, much longer than they do without the audioguide.) Meanwhile, I patiently waited for them to move on so I could get the right image. 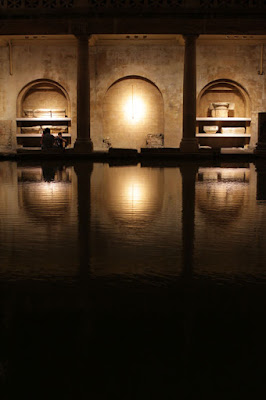 Often, your image will be enhanced with a person or two in just the right spot. The next two examples, from Cinque Terre and Bath, are images where the mood is further conveyed by the people in the frame. In both cases, I had to wait until the subjects walked into the right light to capture the image. 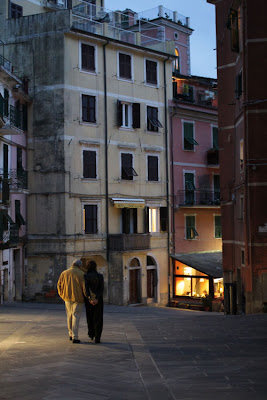 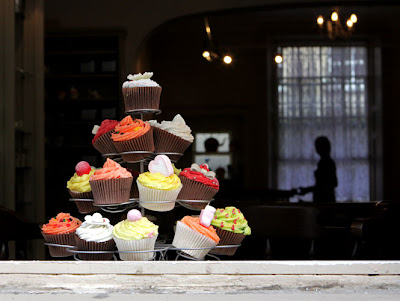 So far I’ve shown you empty or mostly empty places – what about crowds? I’ve learned quite a bit about photographing a crowd over the last couple of years. Capturing a crowd can convey the energy, the hustle and bustle of a place, but it has to be done right. In general, I’ve discovered that for a good crowd shot, you want to have full bodies – partial people walking into the frame or cutting off feet is distracting. For a generalized crowd, you also want the people to either be small enough their faces aren’t easily distinguishable or facing away from the camera. Nothing attracts the human eye quite as much as a face, so your crowd shot can become an unintentional image of a specific person if you’re not mindful. Here’s a comparison of two images within moments of each other in Madrid. The first shot is one I would consider a nice crowd-in-the-street scene, the second has more crowd distractions. 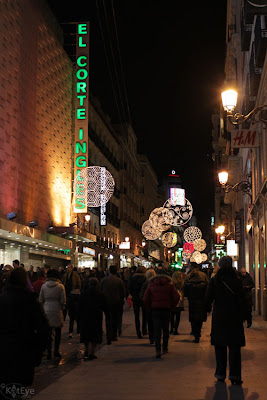 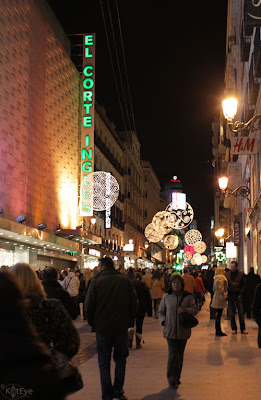 Crowds ebb and flow, which is a great thing. Unless you are in an insanely crowded place (like Venice at Carnevale), you can usually situate yourself in a good location and wait for the crowd to disperse itself in a way that works for your intended image. This example from Venice (not during Carnevale) was one where I waited for a good crowd position before pressing the shutter. 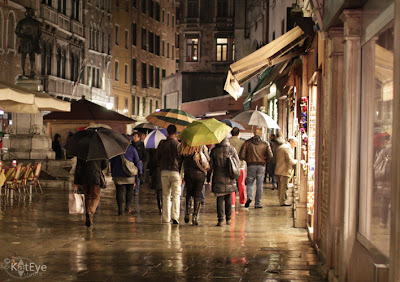 
So far I’ve talked about human elements, but natural elements – such as light and wind – are some of the more changeable features in our world. As photographers, we live for light, so being aware of the light you are working with and how it may change is an important skill. Partly cloudy and windy days can be great days for waiting to click.

The following set of images from Stonehenge show how just a few moments difference on a partly cloudy day can make a huge difference in an image. Watching the light, and waiting to click at the right moment, can pay off big dividends in your images. 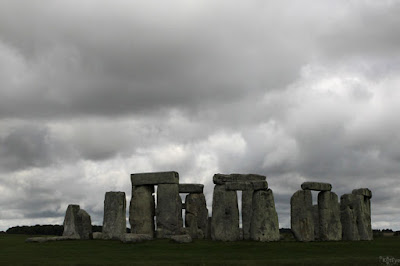 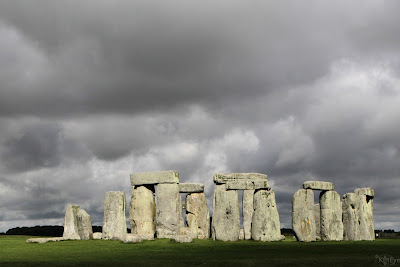 You may remember this group of three image from Cascais, Portugal.  This another time when I waited for the right light to click. The sun was going in and out of the clouds, and without the dappled light this image was not the same. I waited for quite a while for the sun to come out from behind the clouds to capture this scene. 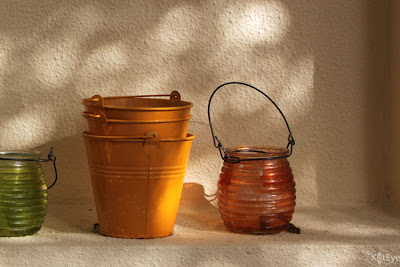 For the next example, it was the wind that made a difference. With wind, you sometimes have to wait for a gust or wait between gusts, depending on what you want to capture. In this image of the main street of Murten, Switzerland, I had to wait for the breeze to die down so that the flags were hanging straight and clearly visible. A subtle detail, but one that means the difference between you being able to tell the location by looking at the image or not. 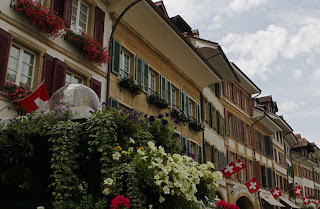 I’ve shown you a lot of examples where my patience paid off, but also realize that waiting to click doesn’t always work out. There are times when the elements don’t change as you predicted. There are times when you can’t wait as long as you like – the people you with are impatient or you have someplace to be at a certain time. But when you are aware of your environment, seeing the opportunities and waiting to click – sometimes magic happens.
Wait for it…
Wait for it…
Click. 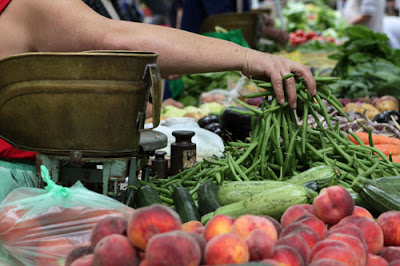 I can’t wait to see the images you captured by Waiting to Click, new or archive shots are welcome. Link your images in below or put them in the Flick pool. If you have the opportunity to comment on how you set up the shot and waited to click, that would be fun to read. I would love it if you want to add my button to your post, you can find the code here.