So, I’ve been a bit missing online this fall. Part of it has been a creative slump, which I’ve been pulling out of with my digital painting. Part of it has been my new job, taking on a management role again. But there is one more part I haven’t talked about here… and that’s the part about me becoming a mentor for my son’s FIRST Robotics team.

If you’ve never heard of FIRST, it’s a great program… In the Robotics Challenge, high school teams from around the world design and build robots to compete with each other. Each year is a unique game and challenge. This year’s game is called Steamworks and involves robots collecting and placing gears, collecting and delivering balls to high and low goals, and climbing ropes.

My son Brandon is a sophomore in high school and this is his second year on Team 997 Spartan Robotics. Last year, he wasn’t so sure about it. It’s a HUGE time commitment. The “build season” is 6 weeks from start to finish, with the new game released each year in early January. Teams start designing and building after kickoff in January, and complete the robot by mid-February. It’s 5 meetings a week, after school and on Saturdays, because designing an building a functional robot from scratch is not an easy task.

And, as we learned last year in his first season, it’s an amazing experience for the kids who participate. For me, working as an engineering professional for 24 years, it’s the best thing I’ve seen in high school to prepare kids for the real world of work. They learn an amazing range of things:

I started mentoring this fall, focusing with the team leadership on project management. In the fall, the team participated in an informal competition called BunnyBots, which serves as training and practice for the real season to come. They didn’t think they could meet the schedule… but they did awesome – they were part of the championship alliance, winning the day! You can watch the final championship Bunnybot match here. Look for the bright blue robot with 997 on it, that’s our team’s robot named “Hermes.”

But that was just practice. This last weekend, the real season started. January 7 the game was released and build season is officially under way. It’s pretty much non-stop until February 18th.

Here’s the team on kickoff day. I’m in there, way in the back. We were even covered in our local newspaper (see if you can spot my son!). 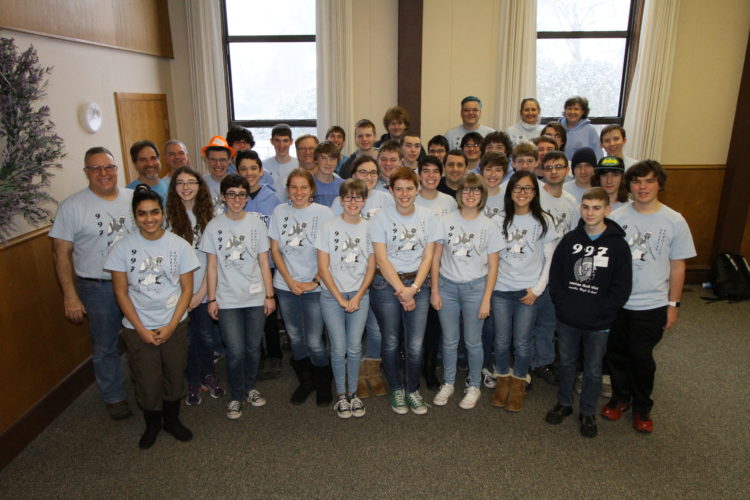 So, yeah, my artistic output has dropped off dramatically since Saturday. I’m sure it will come back as we get into the swing of things. Right now I’m having fun seeing these kids do amazing things, enjoying the front row seat in my son’s development into adulthood, and hoping that I’ll have a little bit of impact on developing some future engineers.