There are many reasons I love mobile photography, but this morning one of them is really coming to the fore: I don’t have to sit at a computer to edit photos. I can, and do, create my art sitting in my comfy chair. Knees up, tablet resting, stylus in hand… It feels more like drawing or journaling than it is traditional photo editing. 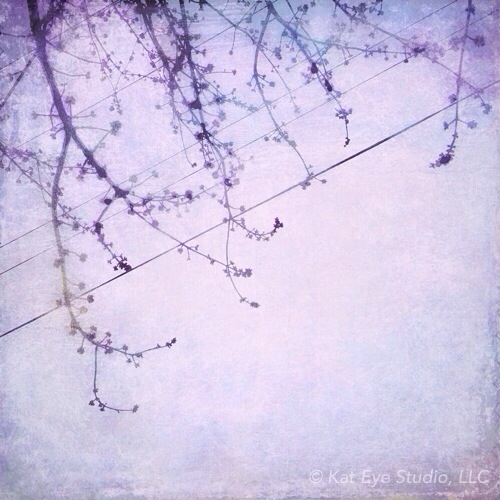 As does my body.

I’m sitting here this morning with a heating pad on my shoulders because they are sore. It’s been an intense week at my corporate job, with 7-8 hours a day on the computer for some analysis work I’m doing. Lots of mousing. Last time this happened, it was triggered by a photography project, creating the video for last year’s Liberate your Art postcard swap. It doesn’t matter where it starts, the end result is the same. My body tells me it’s too much, by hurting. I need to listen.

I know the drill… Make sure I’m using good posture and ergonomics. Lay off the intense computer time for a while. Go to yoga and stretch. Take care of myself, and don’t push it any further.

The beauty is… With mobile photography, I can still create my art. Where “staying away from the computer” used to mean staying away from editing photos, now it doesn’t. Because using a finger or stylus on a tablet, as far as I can tell, doesn’t have the same effect on my body as using a mouse. I can create and share, anywhere, without hurting myself.

To be honest, I was primed and ready for this shift. It’s probably one of the reasons I’ve taken to mobile photography so strongly. I’ve never loved how much time digital photography required on the computer. I always felt I spent enough time sitting at a computer for my corporate job, so I didn’t love sitting there even more at home. It just doesn’t feel like a creative place. I accepted it as part of the process though, and adapted my expectations. I learned to enjoy the outcome, if not the process.

But it did temper my creativity. I didn’t learn Photoshop, with all of its creative possibilities, because of the time investment. Spending even more time on the computer was not what I wanted.

I am amazed though, at what was waiting for me, when I found the right tool to fit me. Look at the creativity in my art that has blossomed in the last year and a half. The tools of mobile photography have enabled me to get beyond the boundaries I had, both mental and physical, which limited my creativity in the medium of digital photography. What a beautiful thing.

I was standing on the front lawn, waiting for a friend to pick me up. Rather than wait in the house, I decided to take the few minutes I had to capture the fading leaves of the trees along my street. It was windy and partly cloudy, the sun dancing in and out of the clouds and the leaves dancing in the breeze. Stalking the trees for a few graceful branches against an open sky, I finally found the right scene.

This edit, Leaf Dance, feels nostalgic to me. Vintage memories of autumn, from a year that already seems long gone. Capturing the leaves in transition is already poignant, but vintage processing can make it even more so. I thought I would share this edit as a mobile tutorial, so you can see the challenges and phases an image goes through along the way. I usually can’t see where it will end up. I just have an idea of the next step I should take at each phase.

Lets’s start with the original image. I really liked these reaching branches, but was impossible to get them with a blank sky. The trees of the neighborhood were too close. So I endeavored to frame the branches against the clouds with some space between any other trees. Did I mention it was windy? I probably have 10 shots of the same scene because the branches were moving around. This was the best one. 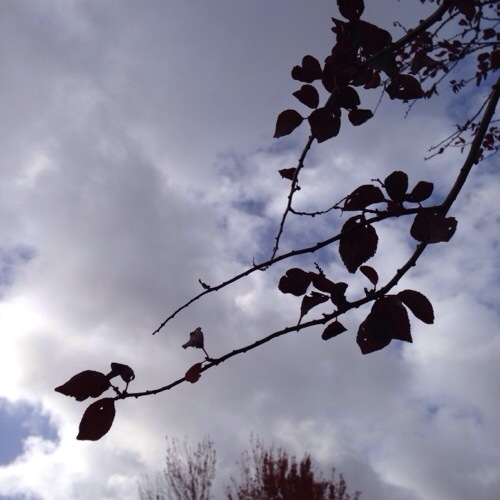 The next step was to remove the distractions of the other neighborhood trees. If there is a gap between the distraction and subject of interest, it is much easier to accomplish. I used the Retouch feature of Handy Photo to remove the trees, crop in closer, and the remove a few of the branches in the background. Here’s the next phase: 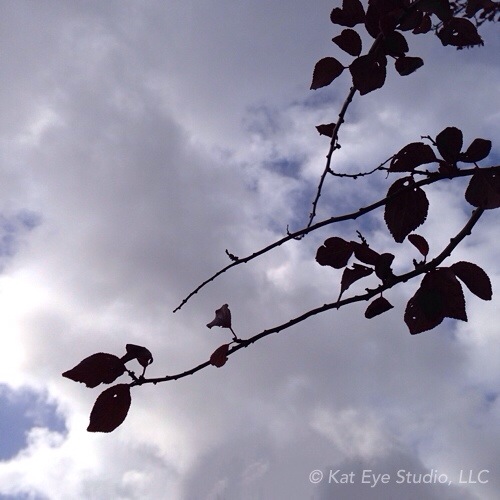 Because of the lighting, the leaves and branches look like a silhouette but I want to pull out more detail. In Snapseed, I start with a global adjustment for brightness, but that didn’t do quite enough for the leaves, so I add a selective adjust to increase the brightness only on the leaves. By doing this, I pull out the details in the leaves, both color and texture, but don’t adjust the sky any further. I want the clouds as is. It looks very odd at this point, my eye can tell it’s wrong, but since I know it’s a transition step I don’t worry about it. Things sometimes have to look worse before they look better. 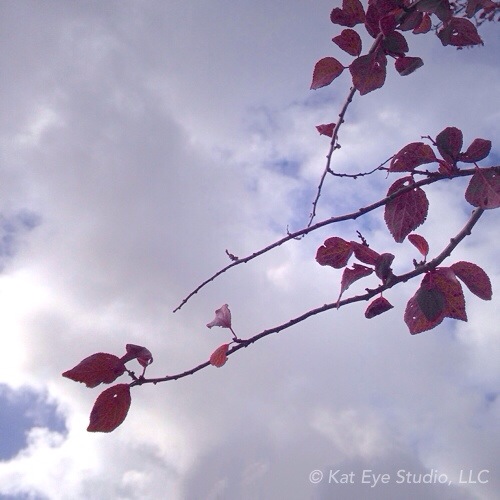 Next step is through Snapseed’s Grunge filter. I dialed the texture way back and scrolled through the options to see what colors felt right for the image. Purpleish-pink! I also played with the center spot and adjusted the location and radius to make sure the focal point of the image was clear, while the less important corners were darkened and fogged. 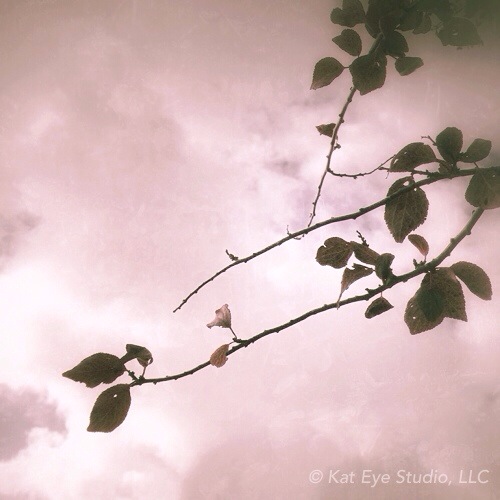 Time for some texture! I pulled the image into Pic Grunger to see what I could do. This app can overwhelm images with its default settings, but if you play with dialing it back a bit you can often find a great aged texture effect. 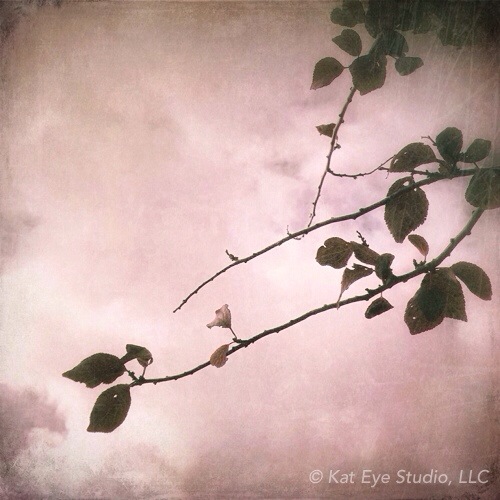 It is almost there. I’d like to pull the focus more tightly in on the branch, minimizing the pull if the brighter sky in the upper left. I pull the image into XnView FX and play with some of my favorite textures. These textures often give just the subtle effect I’m looking for, and this time was no exception. It darkened much of the sky but left the brightness where I wanted it – under the branch. This provides great contrast to pull your eye right to the intended area of focus.

Both the color and processing of the final image leaves me with a romantic, vintage feel. Exactly what I was looking for! Unlike most of my mobile tutorials, there was no blending in this edit. It’s just an image, a couple of apps and the willingness to imagine and experiment. That’s all you need to create mobile art!

This was the photograph of the day for me on Saturday. A few friends and I traveled to a nearby town, McMinnville, for a photowalk together. We were lucky and the weather cleared for us long enough to wander around the historic downtown for a little while.

We were heading back to the car when the contrast of purple and green caught my eye. I had to cross the street to investigate, discovering this awesome building with a series of vine-y trees (or tree-y vines) growing on the windows. I couldn’t wait to play with this one, editing and sharing the image on the drive home.

“This reminds me of Italy,” a couple of people commented on Facebook.

Really? I was a bit taken aback. This looks nothing like Italy to me. The materials, textures and colors are all wrong.

Then I wondered, maybe if this is a photo that really looks like a “Kat” photo, like many I had taken in Italy, and that’s what people were seeing. My “sense of place” coming through. Or, an alternate view, that photographing so much those two years I lived in Italy shaped my sense of place so strongly that I end up framing small Oregon towns the same way. (Or maybe it does look like Italy, and I just don’t see it.)

Do you want to find your sense of place? Join me for the 8-week eCourse, A Sense of Place, starting April 7. Registration is open now.

Today is a day for pretty flowers and happy music! Sometimes you just need a smile in your day. So here are a few things to put a smile on your face…

2. Daring Greatly: How the Courage to Be Vulnerable Transforms the Way We Live, Love, Parent, and Lead

, a new book from Brené Brown is released today. I love the message of her previous books, The Gifts of Imperfection

and I Thought It Was Just Me (but it isn’t)

, so I have high hopes for this new one too. She is doing an 8-week online read-along from 26 September through 14 November on her blog. Want to join me in reading it?

3. Remember the Jumpstart Creativity Tour? I hosted Jess here in Corvallis in July. The tour is still going strong! If you can’t make an event, Jess has created an e-course to inspire your creativity. It’s a 13-week pay-what-you-can e-course. Check it out here. You just might see a little something from me in the course, too!

4. Some happy music! I’ve been listening to Tyrone Wells and I love this catchy tune, And The Birds Sing. Watch out, you might find yourself singing along!

Sing, smile and enjoy your Tuesday.

Um. Hi. I’m at a loss for words today. I don’t know what to write. I’m sure the words will come back soon. They always do.

So I thought I would share another photo from Yorkshire today, since England is still on my mind. And will be, for the next several weeks, no doubt. I can’t wait to get back and capture scenes like this one, from York. Where else might I find a beautiful purple-paned window? Do tell, I want to visit if there are other places like this. 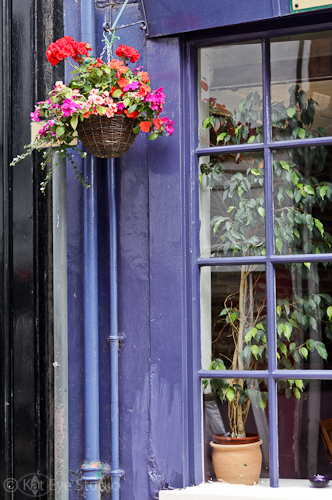 Since I’m at a loss for words here, I’ll also share a link to the interview with me that was posted on We Make London’s blog on Monday. I seemed to find the words for that, no problem.

Words! Come back! I miss you!!

We close out Exploring with a Camera: Repetition today. It’s been a fun one! It’s been interesting to see how repetition can be both obvious and subtle. After this exploration, I will be more aware of the subtle repetitions that can really a tie a composition together. How about you? 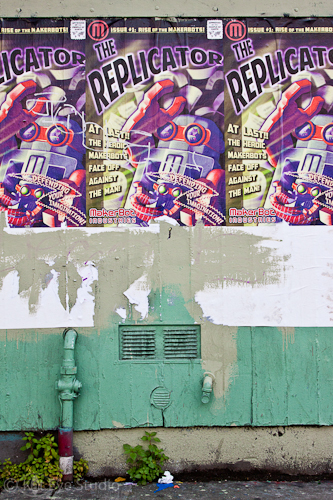 To finish up our study of repetition, I picked this image from San Francisco. There are two repeating elements in this, both the poster repeated and the repetition of the horizontal lines across the frame. Even with the repetition, there is great contrast in this image too: Triadic color contrast of the purple and green, the vertical lines of the pipes breaking the horizontal lines, and the weeds adding a bit of nature in the urban environment. The combination of repetition and contrast makes an interesting image to me. It wasn’t until after I had chosen the photo that I realized the title on the poster, The Replicator, fits perfectly with the theme of repetition. I love it when that happens!

Today is the last day you can link in and share your study of repetition. You are invited to join us! Take a few moments of your time and visit those who have linked in as well, there are some wonderful examples here. It is always good to see multiple points of view!

Have a great weekend! I'll be off looking for repetition myself, in the form of hot air balloons at the Northwest Art & Air Festival.

PS - Don't forget to enter the giveaway I have going on right now. You have until the end of the day on Monday, 27 August to enter.