What a crazy week! I am slowly coming back down from the high of the art fair (more on that later this week) and the wave of publicity that came my way last week. I now have a tiny taste of what happens when something “goes viral.” It’s fun, exciting and more than a little disconcerting.

The Salem Statesman-Journal article that ran a little over a week ago struck a chord with the media. The idea of a photographer choosing an iPhone over a dSLR seemed to pique their interest. The same day, it was picked up by a couple of other sites, most notably Business Insider. It seems they take the quotes and the gist of the story from the original article and publish as a new article, using photographs I’ve posted online. They never talked to me.

From Business Insider, the story proliferated, rewritten and repackaged on other sites all over the world. It was weird seeing my photographs accompanied by French, Russian and other languages. It was even posted on Yahoo News a couple of days later. My website has never seen so much traffic!

And then, there’s the radio story…

Stemming from the same Statesman-Journal article, a producer from Oregon Public Broadcasting’s Think Out Loud radio show contacted me. Think Out Loud is a lunch hour, Monday through Friday radio show on current events in the OPB listening area (all of Oregon and SW Washington). She was interested in my transition from the dSLR to iPhone as well. We talked a little bit on the phone on Wednesday, and she said it would be a Thursday segment if it was chosen. She’d know by the end of the day.

A couple of hours later she called and said they’d like to do the segment, and could I come up to the studio in Portland? This would be in the middle of setting up for the fair, but I was already halfway to Portland (45 miles), so I could drive up from Salem, do the interview, then drive back to finish my booth set up. It would make for a crazy day, but how do you say no to that? You don’t.

So, sweaty from setting up, I drove up to the OPB station, and sat in the green room waiting for my segment, trying very hard not to think about what I was about to do. Live radio. After thirty minutes or so, I was whisked into the booth, shook hands with host David Miller, put on my headset and the interview began. It was over before I knew it. A quick photograph in the booth, and I was back on the highway, heading to the fair to finish set up, souvenir Think Out Loud mug in hand. 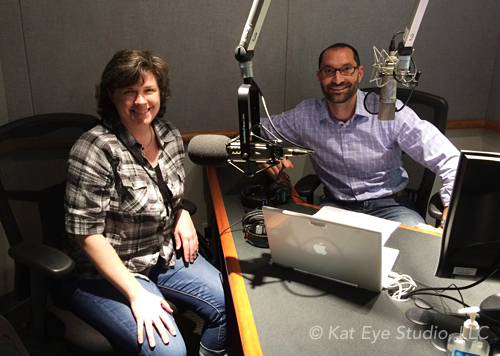 You can listen to the segment here. I haven’t listened to it yet, I just can’t. I keep thinking of better answers to the questions, things I wish I would have said. But I heard lots of nice things about it from other people, so I’m going to believe their compliments and leave it at that.

And the rest of the story…

Because of the internet articles, I was contacted by others who saw my work and had interest in connecting with me for future projects, so there could be some longer term ripples coming out of my little media storm.

And in the shorter term, all of the publicity certainly helped at the art fair. Many people came by my booth specifically because of the newspaper article or the OPB interview. I don’t really want to be gimmicky and have people interested in my work because of the device I use, but half the battle is just getting people to SEE my work and this helped. They will either resonate with it or they won’t, once it’s in front of them. Judging from the response, many people resonate with it.

My viral experience felt big to me, but it was really tiny in the grand scheme. It was a case of the sniffles, not a full-on flu. But it showed me how small things can snowball very quickly into bigger things on the internet, and you just hang on for the wild ride. The experience opened my eyes to a number of things…

I realized that no one needs to talk to you to post an article about you; you don’t really have any say.

I found out that your photographs can be pulled and posted anywhere, so make sure they are watermarked. When you put your work out on the internet, you are giving implicit permission.

I discovered that random people can be mean in their comments, or I take them too personally, so I stopped reading them. I don’t need more negative input, I generate enough of that in my head on my own, thank you very much.

I also discovered that many of the people who work in the media world are really cool. Tom Rastrelli of the Statesman-Journal and Aleida Fernandez from OPB were both awesome. It’s fun to talk to people who are interested in what you do and want to see you succeed. I can’t thank them enough for the opportunities they provided.

Finally, I learned that once in a while, if you are working hard and putting your art out there, it gets noticed. Be ready to take advantage of it.