That’s what I was drawn to this month. 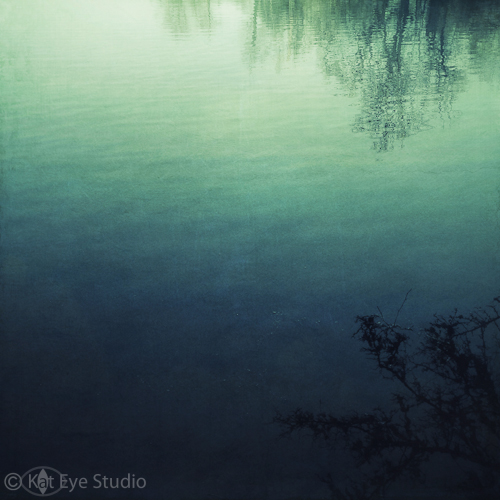 And simplicity. The space and subtle texture in this image calls to me. I want to reside in that expanse of peaceful blue-green.

Sit a while, this says to me. Be still. Breathe deep. Watch the ripples, notice the beauty reflected. Let the busy-ness of life frame the edges but not touch the stillness of the center.

I can return to this place of peace and quiet, anytime I need to. It is always here for me.

Ah, what a beautiful message to receive as I end this crazy week! It was interesting to see the peace and simplicity I was so clearly drawn to in my images, as I sat down to find my Photo-Heart Connection this morning. This image reminds me that peace is always available to me. I’ve been trying to keep in touch with this place all week, but wasn’t quite where I wanted to be. I have room to grow, more to learn, on staying balanced and centered. But I have help, in my art, in images of peace like this one.

I think I will print this image out and keep it around to remind me of this message. Maybe even put some words on it, “Be still. Breathe deep.” I will give away a print of this image, with or without words, to one of the people who link in to the Photo-Heart Connection this month. It feels right, to share it. To spread the peace. 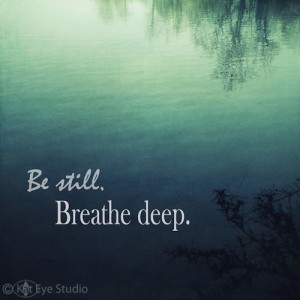 What is your Photo-Heart Connection this month? What do you find when you open your eyes and your heart to the subtle messages in your photographs? I look forward to visiting you, to find out. Reading your discoveries always bring me back to this beautiful place of stillness and peace as well.

Welcome to September’s Exploring to a Camera! Today is one of the rare times when Photo-Heart Connection and Exploring with a Camera overlap, due to my crazy September schedule. You can link in to both today!

This month I am exploring space in my photographs. I’m looking at when and where allowing space in the composition creates a more compelling image. 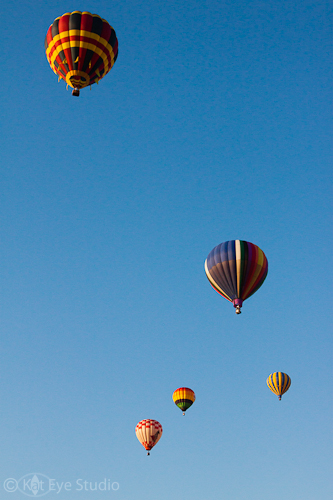 The balloons at the recent Northwest Art & Air festival were a perfect subject for allowing space. There is an expansive feel of the balloons floating through space. Expansive, peaceful and calm are the feelings that often come from the photographs where I allow space.

How do you allow space? Is space only created by a big open sky? Definitely not! Let’s explore…

Almost every photograph has some element of “space.” Any time you have separation between objects within the frame, there is space. The space I’m talking about today is a little bit different than the emptiness you find between objects, I’m considering “space” as a visual element on its own. My definition of “space” is a single, continuous visual element in a photograph that fills more than half of the frame but is not the subject.

The wall in this image from Korkula, Croatia shows the kind of space I am talking about. The subject is the set of chairs creating an inviting place to rest in the alleyway. The wall is more than half of the frame. The emptiness of the wall both leads the viewer toward the chairs, and increases the sense of intimacy of the little scene. 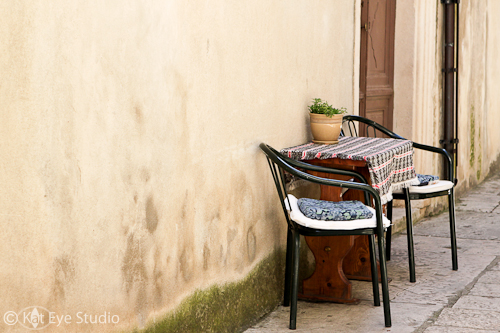 This example shows that space is not just emptiness. Space as a visual element can have color, texture and variation. There area few ways that I’ve found allowing space is effective in my photographs.

The space in a photograph can serve as a backdrop for the subject. This is a very common way I use space. The example of the bicycle below shows the space as a backdrop. The brick wall has both color and texture, but provides a visual element that is behind and secondary to the bicycle. It is the canvas for the bicycle as a piece of art.

In this next image, the space of the wall serves as both background for the scene and backdrop for the shadow. The space in the photo allows the subject to be the shadow rather than the actual decorative tree. If more of the tree were in the frame, it would draw your eye. 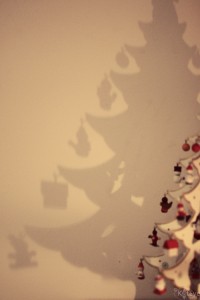 Allowing space to fill an area entirely around the subject creates an effective frame. The textured yellow wall frames the decorative house numbers in this image, changing the strong color from a distraction to an element that highlights the subject by its contrast.

The blurred background in this image frames the detail of the flowers. Visual space does not have to be a physical surface or emptiness, it can be created through a shallow depth of field which blends different elements into one continuous element. The out of focus field of the background makes the tiny details of the plant more noticeable and dramatic.

Allowing space in the frame can balance busy elements. In this scene of the food cart, the blank wall allows space that balances the busy detail of the cart in front of the doorway. 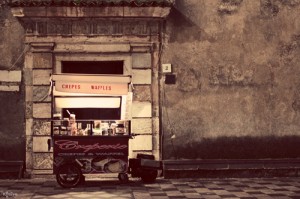 The green door in the image below provides the space to balance out the other graphic elements of square, circle and line. Again, notice that the green is not continuous. It has variation and texture, but creates space in the photograph. 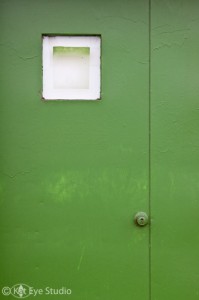 Allowing space provides a contrast that helps the viewer focus right in on the subject. Along with acting as a balancing element, background or frame, the element creating the space often creates contrast too. The concrete wall in this image serves as both frame and contrast for the window. The color and detail of the window, with its reflection and plant in the windowsill, are emphasized by the lack of color and continuous texture of the wall. 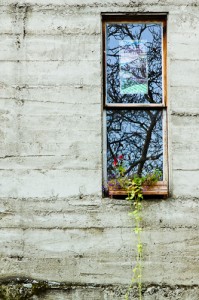 The shape and color contrast of the leaf against the pebbly ground is one of the things that make this image effective. While the wet ground has lots of texture and variation, visually it serves as a background for the red leaf. 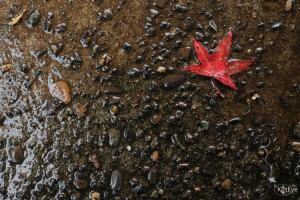 So, how do you allow space? I must admit, I rarely think of allowing space explicitly as I’m framing a photograph. Space often finds it’s way into my photographs when I need to eliminate a distracting element (see Exploring with a Camera: Process of Elimination), or as a byproduct of combining other elements. The lonely bicycle in Bologna is a good example of unintentional creation of space. I wanted to capture both the interesting timeworn pillar and the lonely bicycle. The resulting photograph allows the space created by the empty wall. Effective, but not intentional. 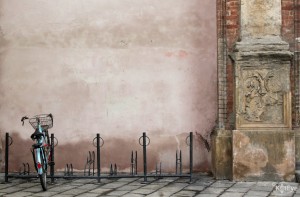 In the image of this fun stoplight near our home in Italy, the space in the image comes from the need to avoid the distractions of the background. Any other perspective than looking into the sky would capture an ugly scene of roads, fences and apartment buildings. 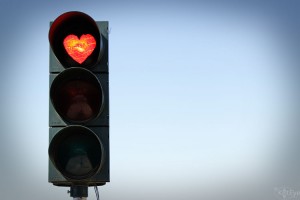 Even though allowing space is not foremost in my compositional toolbox, I have used space to create a feel in a photograph, such as this one from Lake Garda in northern Italy. The space created by the water, along with the framing of the pier as a small, off-center element, provides a stronger feeling. What is your reaction to it? 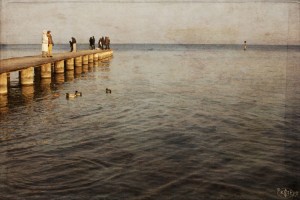 Space can also create an interesting composition out of a relatively simple scene. The snow-covered spring flowers are interesting on their own, but I think the off-center composition, with the inclusion of the snowy space, makes the scene more interesting. 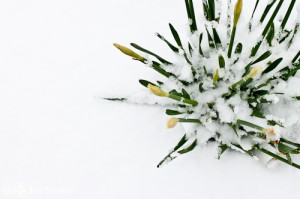 Isn’t it cool how this simple idea of allowing space can create an interesting image? As someone who often fills the frame, this exploration is a good reminder that sometimes “less is more.” I like the feeling of the images where I’ve allowed space. I’m going to have to use this effective concept more often.

Now it’s your turn to share. Take a look at where and how you allow space in your images, and then go out and capture some new photographs with these ideas in mind. I can’t wait to see what you find when you allow space! 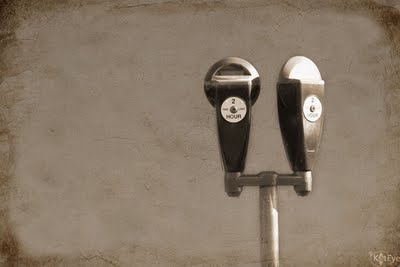 There are a few surprising things that I have found interesting to capture since returning back to the USA. Newspaper boxes, mailboxes and parking meters. Lovely parking meters, like this set, all by themselves. Or parking meters with something else, like my scooter. I didn’t see these beauties in Italy, there was usually a box where you would pay down the street and print a receipt. That was boring. These are interesting. 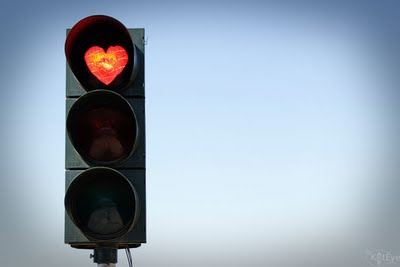 Your heart has a message for you. It says, “Stop running around. Do something you love.” You can link in this weekend with the Mortal Muses on negative space. If you are looking for peaceful images that give you space to breathe, check these out. There is something so calming about negative space in photos.
This stoplight is real, the heart is not a figment of my imagination created in Photoshop. It could be found a few blocks from our apartment in Italy. We lived near a hospital, and one of the intersections near the research buildings had this stoplight. Very cool, huh? I tried photographing it numerous ways, but it turns out negative space, stoplight and sky, was the way to go.
I hope you’ll heed this message over the weekend. Stop with the “to do” list for a little while and do something you love. Your heart will thank you!
_________________________
What’s going on around The Kat Eye View of the World…

From scooter love yesterday to Burano love today. I am sharing “color” today, in honor of the wonderful Rachael Taylor who has featured me on her blog. Rachael is a surface pattern designer I met at the Do What You Love Retreat in May. Her work is beautiful and simple, and she loves bright colors, just like me. Stop by and visit her blog here to see me featured, and stick around to see her work. You will find something you love, I guarantee it. My favorite is this orange bag, which I brought home with me from the retreat. I’m so excited that it arrived with my goods from Italy, and I can start using it again. Orange Power!

I’m celebrating negative space on Mortal Muses today, so thought I would share some “space” here too. Have you stopped by and visited Mortal Muses lately? There’s been a lot of change! We celebrated our first year at the beginning of August and now have five lovely new muses bringing their beautiful images and words your way. I have always loved how having nine different people working together creates a place of such beauty and diversity, and that has not changed. I hope you will join us there.

PS – Don’t miss the giveaway on yesterday’s post, there is still time to enter.