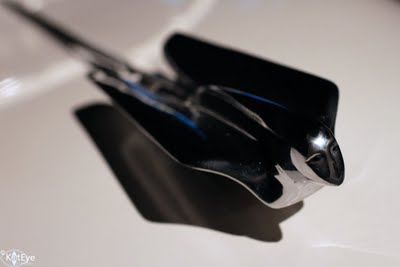 Look at this hood ornament. Doesn’t she look like she’s soaring? Head up, face straight into the wind, with confidence and joy. A few months ago when we visited the Italian car museum in Torino I was fascinated with hood ornaments on the cars from the 20’s, 30’s and 40’s and have many pictures of them. This one captures a spirit of freedom that the others don’t though. She belongs on the hood of this car. You can tell, this is her place and it is right for her to be there.

Why do I love her so much? What does she represent for me? I think maybe she represents how I want to live my life… looking forward, speeding ahead into the unknown, the wind on my face. A feeling of exhilaration and freedom from restraint. Of unrepressed joy in the rightness of being where I am. For her, it doesn’t matter the destination, it’s the movement she celebrates. There is no fear in her.

Life lessons from a hood ornament. Who knew?

What does she say to you? 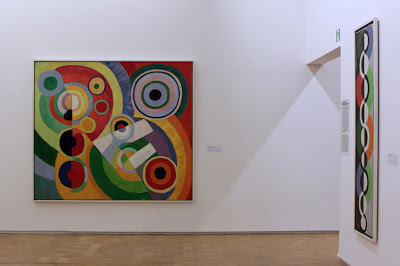 In my time here in Italy, as I’ve explored art history and art museums so much, I’ve learned to really notice what art calls to me in some way. I’ve discovered it changes over time, as I change and grow. On this trip to Paris I found myself drawn again and again to abstract art. Art that explores color, form and composition separate from representation of real life. Especially bright, luminous colors. Vassily Kandinsky, Paul Rothko, Sonia Delaunay and Robert Delaunay (pictured here, in the Musee National d’Arte Moderne) were the artists whose works captured me repeatedly.

What does this mean for my art, my view of the world? What does the appeal of color and form and abstraction tell me? I don’t know now, but I do know it will show up in some way. All of these explorations become fodder for my own creative endeavors, and the art that calls to me gives me the hint of the direction I will be heading. It should be interesting to see where I go next. 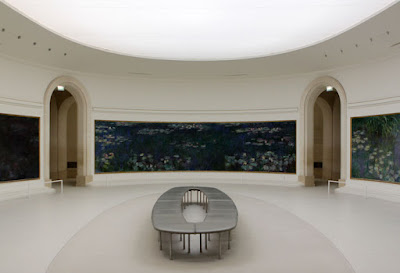 Imagine visiting Musee L’Orangerie in Paris, and seeing these larger than life canvases of Monet’s water lilies. Then imagine, for a moment the ebb and flow of people visiting leaves the room empty. Nothing but the natural light filtering down, and the brushtrokes created by a master of light and color all around. Beauty and peace. That happened to me more than once on Sunday morning, as I visited this wonderful place. Just me and Monet. 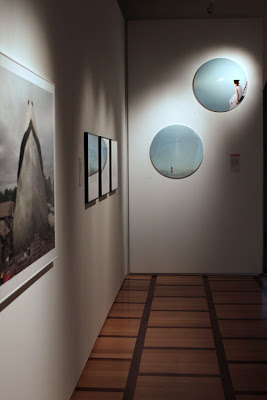 In my visit to the Rosengart Collection in Lucerne, I had the opportunity to see the photos David Douglas Duncan took of Picasso. Duncan, a photojournalist, became friends with Picasso and captured some extraordinary images of ordinary moments in Picasso’s life. The thing that struck me was the humor and zest for life that Picasso had, it just comes through in the images of him in his home, interacting with his family and his art. How powerful is that, to capture the artist that created the art, and to get a glimpse of the personality? It makes my understanding of Picasso and his work so much deeper. I don’t have any pictures of the exhibit, but you can see many images of Picasso by Duncan on the web here.

As we explored the Swiss countryside around Gruyere, we stopped at the Musee Gruerien folk museum, where they just happened to have an exhibit of the photography of Emmanuel Gavillet, a modern Swiss photographer. The subject was Gastlosen – the Swiss “Rocky Mountains.” All black and white, shot with an 8×10″ film camera, the images were beautiful in their capture of contrast and texture. The display also showed some elements of the 8×10″ camera, which were helpful to explain aperture and film to Brandon, who is fascinated by the workings of my camera and the idea of “film” is completely foreign to him. The images, printed large and on the wall, were powerful. They were images full of quiet grace, showing the timelessness of nature. A reminder that photographs are at their best when viewed large, they are truly art.

The city of Lausanne has one of the first museums in Europe dedicated to photography, the Musee de L’Elysee. The current exhibit is reGeneration2, an exhibition of 80 young photographers (in art school) from 30 countries in North America, Asia and Europe. I was struck by the sheer variety of it all… from people to architecture, from candid moments to studio, from black and white to color, from film photographs to digital collage, even shape (see round photos, in image shown above). 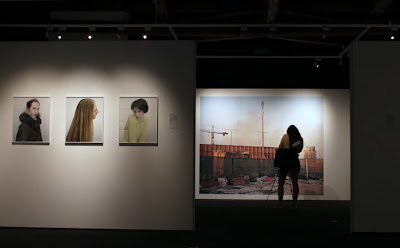 Some of the photography I loved, some I didn’t like, but it all reaffirmed my belief that we all have a unique vision to show the world. Art is personal, so for every person that doesn’t like our art, there is someone who will. We need to keep showing our personal vision, developing our own style. Regain the irrepressible confidence of youth, the belief that you can do anything, that these photographers show.

While wandering the waterfront in Geneva, we ran into a photography exhibit called “Chernobyl: 25 Years After the Catastrophe.” Powerful images from Guillame Briquet, showing the area surrounding Chernobyl today. He captured the decay of the human creations and the rebirth of nature left to itself, even in the wake of such a damaging event. What a contrast, against the backdrop of the festive carnival also happening along the lakefront. 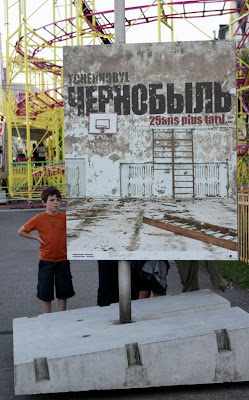 The most striking images for me were the ones that showed the evidence of lives interrupted. Just left behind. And the saddest part? It was too late for most of the people in the town of Pripyat to survive, since they were evacuated a full day after the accident because of the extreme radiation to which they were exposed. 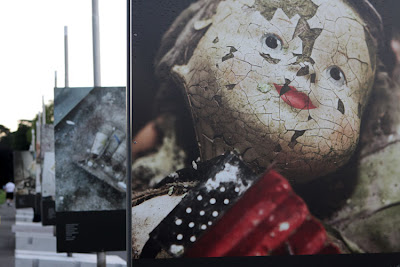 This exhibit showed the power of photography to teach us about history, to remind us of events of the past and the longer term ramifications. To teach us about what the human ego can do, when left unchecked. Photography has the power to keep the world honest.

Finally, last weekend back in my home area of Milan, Italy I found the exhibit of Alberto Bortoluzzi‘s 24+1 Cinema Chairs Project. What a delightful find this was! Finding an old movie theater chair in the dump, Bortoluzzi was struck by the disappearance of these chairs for their cushy, higher tech cousins. He began wondering about the stories that old movie theater chairs might tell, and started to find and document these chairs. He then contacted filmmakers for their memories of the cinema and the result is a powerful essay on the history of film, through the images of these chairs and the words of the people who helped create the films. A first for me, I actually made a beeline to the bookstore and purchased the book of the project so that I could enjoy the images and stories at my leisure. Bortolozzi’s work shows the power of photography, when paired with stories, to capture something greater than the image itself. To create something wonderful and new.

Photography is amazing, isn’t it? We need to move it from the computer screen and onto the wall. We need to experience it larger than life, as a part of our physical environment. If you can, take the opportunity to go see an exhibit in person soon, and share what you learn! As for me, I think I’m going to figure out how to view some of my photos, live and in person.