Last Sunday I left home for a technical conference in Arizona, arriving home late Wednesday evening. I enjoyed a few short days at home and then tomorrow I fly down to San Diego to work for the week. All of this travel is fun but not very conducive to writing, so I haven’t been here on the blog much. 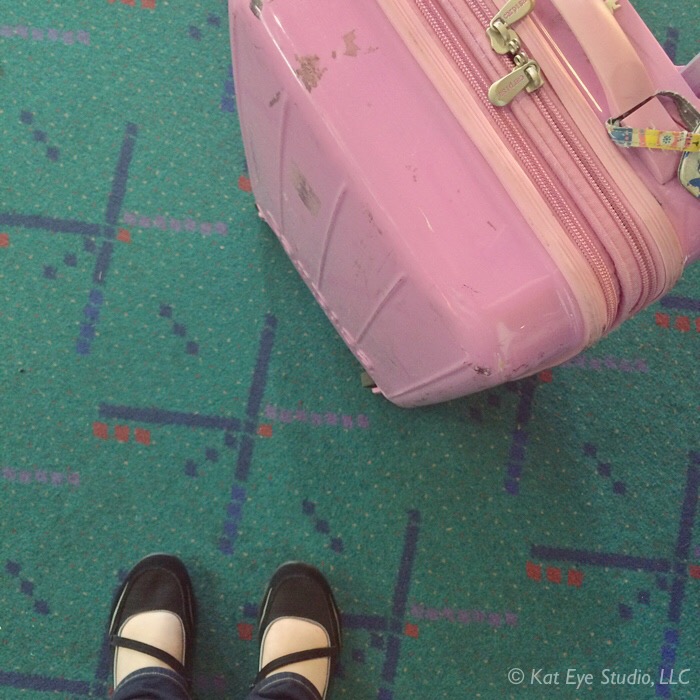 I finally caved and took my own shoe selfie on the Portland Airport’s old carpet, which is rapidly vanishing as they replace it with new carpet. If you didn’t know you this was a “thing,” then check out #pdxcarpet on Instagram. Who knew carpet could reach cult status? Of course, I had to include the pink suitcase, which goes wherever I go. Off to San Diego!! 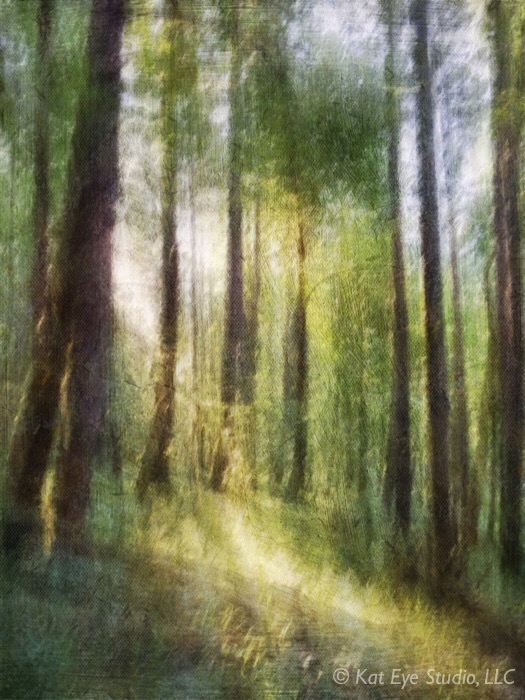 When I’m home, I’m still getting out hiking and enjoying the forest. This year, I’ve become enamored of playing with long exposures using the Slow Shutter Cam app. I enjoy the experimental nature of slow shutter work. You play and play and once in a while something wonderful results! I love the feelings the light and lines in the forest evoke, and seek to enhance the feeling in the post-processing. I’m now working on a series of these images. They’ve given a focus to my hiking photographs, and I’m starting to explore how best to present them. Stay tuned.

My son completed middle school! My in-laws were in town the last week to attend my son’s last choir concert of the year and to be here for his 8th grade celebration. It’s always fun to have them here! Brandon is getting very teenager-looking, isn’t he? He’s very excited for high school in the fall. 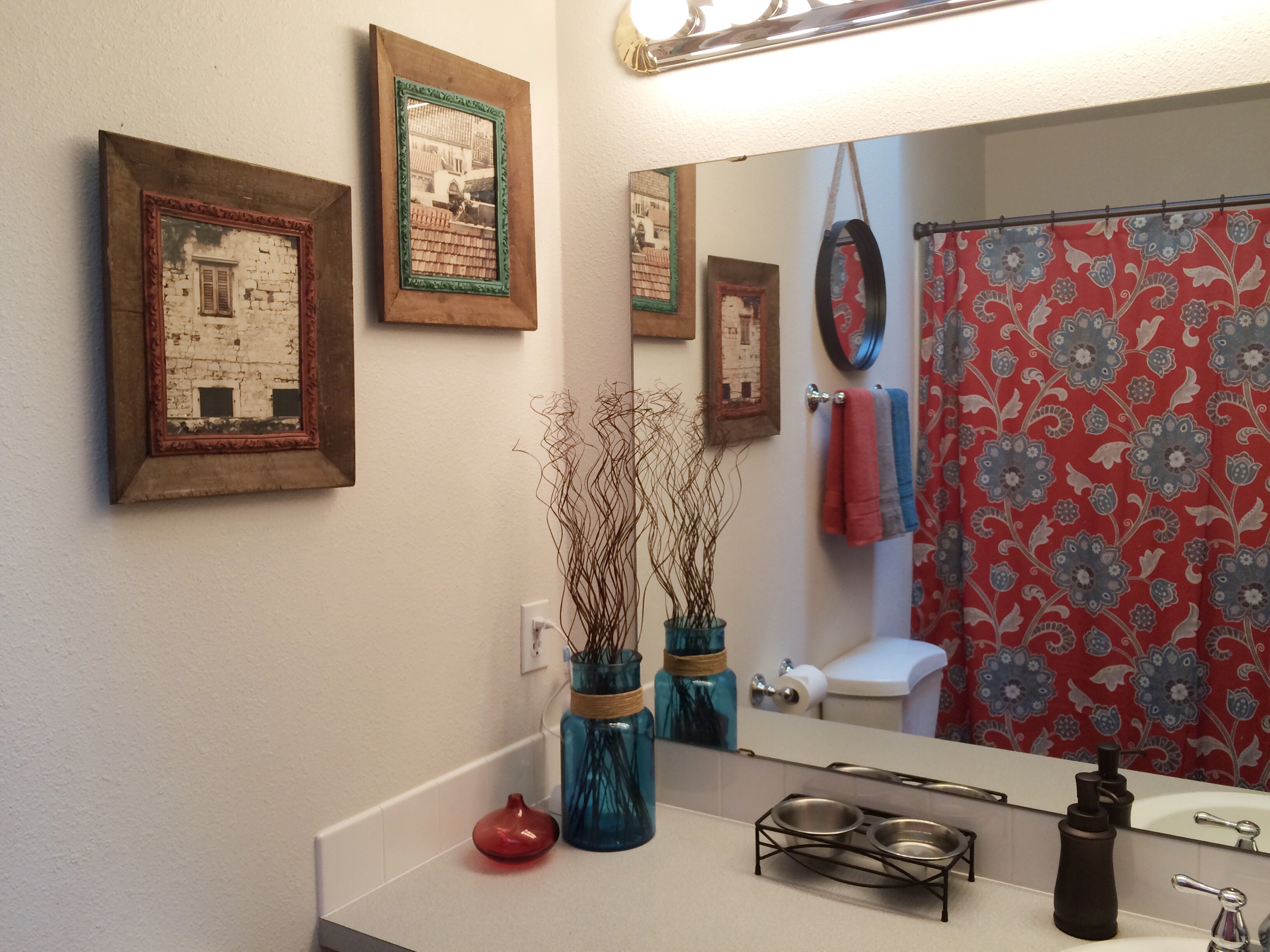 Anytime my mother-in-law comes to visit, we have a decorating project to do. I can arrange things artistically once I see them in a room, but she has a knack for finding the individual elements to pull a room together. This time the project was our hallway bathroom, which has been largely undecorated for the 17 years we’ve had this house. Now it’s a cozy place, thanks to her help!

The project also involved visiting my photographic archives to find and edit a couple of images for the frames on the wall. The sandy brown color in the room reminded me of the stone in Croatia, so I chose these two photographs, from Split and Korkula respectively. I thought you might enjoy seeing them, too. If you like the processing on these I’ve created a Lightroom preset called “Croatian Stone,” which you can download here. (Word of warning: I’m still using Lightroom 4 so hopefully it will work in newer versions.)

And with that, I’m off again! I hope to share something with you from the beach in California later this week, but given my success in blogging from the road in the past, I’m not promising anything. Have a great week!

We must walk into the arena, whatever it may be – a new relationship, an important meeting, our creative process, or a difficult family conversation – with courage and the willingness to engage. Rather than sitting on the sidelines and hurling judgment and advice, we must dare to show up and let ourselves be seen. This is vulnerability. This is daring greatly.
— Brené Brown in Daring Greatly

I have a message today. A message from the universe. It’s not for you, it’s for me, but I’m sharing it with you too. 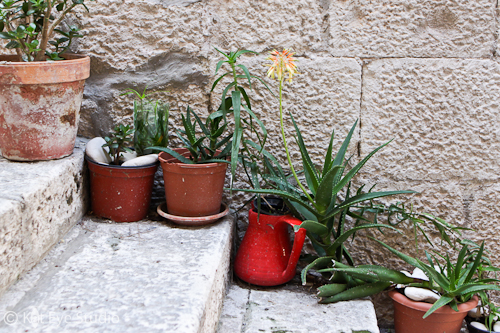 . I’ve mentioned before, I have read and like her previous books, so I wanted to read this one right away. As I read the first couple of chapters, I found myself thinking, I really should watch that TED talk she mentions. I’ve heard about it but never seen it.

A little while later I stopped my morning reading and got on the computer to check my email. I open an email newsletter from a friend, and in it she is sharing Brené Brown’s TED talk. Whoa.

I’m thinking on these messages today, since they were sent to me in such an obvious way. Do they connect with you too?

PS – I mentioned previously that Brené is doing a read along of her new book on her blog started next week. You can find out more here.

We wrap up our exploration of Visual Weight today! With this Exploring with a Camera theme, have you been noticing how visual weight is a fundamental contributor to great composition? Find the weight, and you find the focal point of the image! 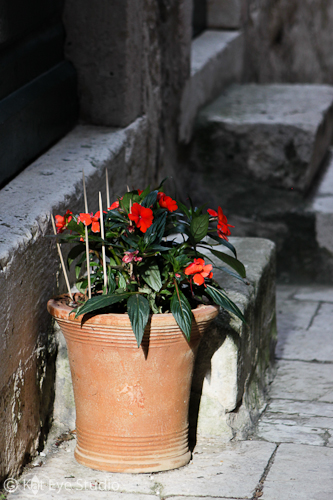 This image from Korkula uses several concepts we discussed in Exploring with a Camera: Visual Weight to bring the focus to the pot of flowers: Illumination, bright color, and off-center placement.

What have you found in your images? You still have time to link in and share with us today! Or, just explore the links below for some great examples of Visual Weight from participants.

It’s 5am on a Sunday and I’m wondering what I’m doing awake. The sun isn’t even up yet; the sky is barely lightening. My husband is snoring peacefully down the hall. I get up early most mornings but I expect to sleep in, at least a little, on the weekends. Not get up even earlier than I do on weekdays. I guess my body is ready for the day, even if my brain isn’t!

I had great success in the spring cleaning of my studio yesterday. It feels so good to have a clean space. Aaaaahhhhh. Today will be more cleaning, but this time in my virtual space. My email inboxes need to be cleaned out. They’ve gotten quite cluttered and when that happens I start to miss important information. For some reason it’s not as satisfying as cleaning in the real world but it must be done.

I thought I’d continue with the “laundry” theme I started in yesterday’s post with this image from Korkula, Croatia. It’s not laundry, actually, but a store display with a laundry. I loved the repetition of these cute, colorful baby shirts against the warm stone. An effective advertisement, don’t you think? 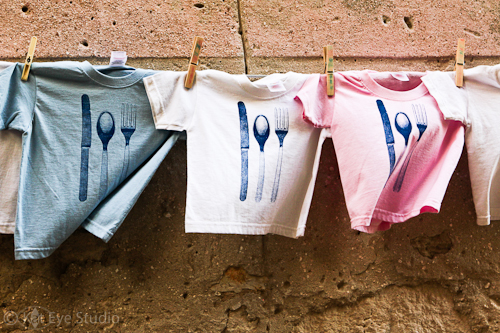 Happy Sunday to you! I’m off to journal and read a bit before the house wakes up. Quiet time is the reward for being up at 5am.

Have you ever looked around and said, “Hmmmm, how did this place get so dirty?” Yeah. That’s my studio. I have all sorts of piles in all sorts of places. They’ve been accumulating for months in some cases and it’s time to dig through and organize them. Shake the dust out of the rugs and clean up the surfaces and generally make things spic and span. 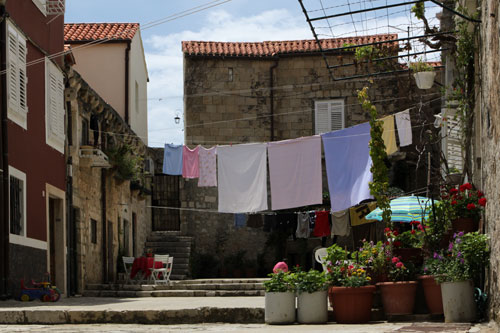 There’s nothing like a clean space to sit and relax in, after all that work is done, don’t you think? I look forward to that feeling later today or tomorrow when this cleaning project is done. This image of a courtyard in Dubrovnik, Croatia gives me a preview of that feeling. I can imagine myself sitting under the umbrella by those potted plants with the scent of sun-drying sheets in the air. Nice.

Welcome to May’s Exploring with a Camera! This month we are going to explore the concept of Visual Weight in our photographs.

When we studied Balancing Shapes a couple of months ago, I had to touch on visual weight in order to discuss balance. The two really go hand in hand! As I prepared materials for my latest class, A Sense of Place, I realized that the concept of Visual Weight not only provides a foundation for balance, but it provides a foundation for many other compositional principles that apply to photography.

So, this month let’s take a look at how Visual Weight works in our photographs.

What is Visual Weight?

There are a number of ways that an object garners visual weight and attracts the eye of the viewer. Here are a few:

The best way to understand visual weight is to look at example photographs which catch your eye and see how visual weight plays into their effectiveness. Visual weight is only one concept playing into the overall composition, but you can readily see its effects.

In this first example, the red leaf is clearly the subject. While the color of the red leaf is not necessarily brighter than the yellow leaves around it, greater visual weight is given to the object that is different and breaks the pattern. The visual weight of the leaf is further enhanced by the relative focus between it and the surrounding leaves, and its off-center placement within the frame. 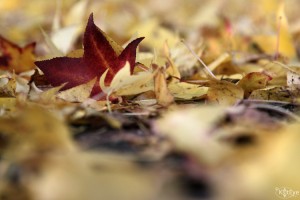 In this image from a Steve McCurry photography exhibition, all attention immediately rests on the eyes of the subject photograph. The human face has greater visual weight, which is enhanced by the illumination of the photograph relative to the background and the off-center placement within the frame. 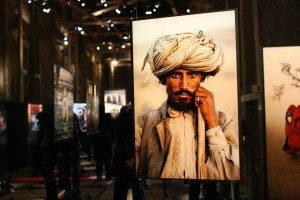 In the image below, my attention is drawn to the chair in front of the door even though the contrast between the door and the chair is not great. The door first pulls the eye by being a brighter color than the surrounding wall and ground. Next I notice the chairs, my eye pulled to the isolated chair in front of the door. The off-center placement of chair and door add to the visual weight of these elements. 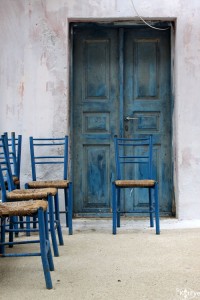 The fan in the photograph below has the greatest visual weight through the brightness of the color relative to the other elements. It breaks the pattern of the bars and mesh in front of it, as well as the empty space behind it. Placing it off-center enhances the visual weight. 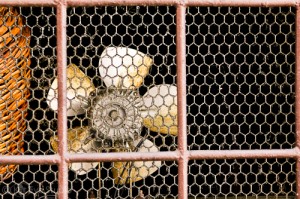 As you go out exploring with your camera these next couple of weeks, keep visual weight in mind. Look closely at the relative visual weights of your elements before you compose your photographs, and see if that changes anything you do.

Come back here and share your results, either new or archive. We’d love to see what you’ve learned about visual weight!