Whew. Made it through a crazy week at work. It was one of those weeks that felt like Friday on Wednesday. By Friday it felt like three weeks had passed, so much had happened. It’s a tiring feeling but also a good feeling. We exited the week in a radically different place than we started. We learned a lot and made progress on the problem we were working on, so it wasn’t wasted effort.

If you’re like me, wasted effort is something I like to avoid. There is nothing worse than doing a lot of work to find it’s gone no where.

I’ve had to revise that thought in my creative world. One of the things I love about mobile photography is that I can experiment. I throw out the rules and have no goals. Or if I have a goal, I’m willing to let the goal fall by the wayside if it’s not working. Often, I come up with nothing good. Downright horrific stuff. But sometimes things comes together, and it’s magical. 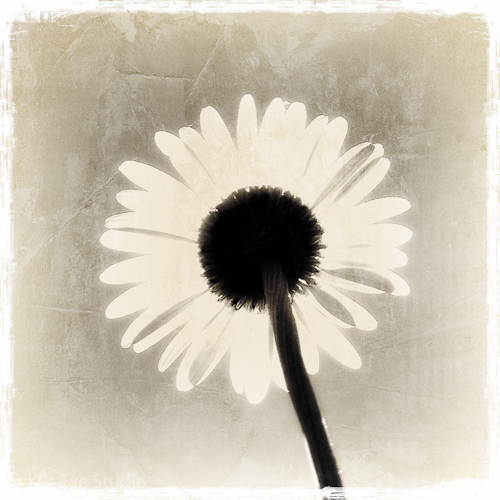 This flower is the result of a lot of experimentation. Trying to get an iPhone shot from below led to tons of thrown away files. But I got one. Even that one was a bit of a disaster, with my head partially in the frame. But it was enough to play with the processing. The end is not anywhere close to what I had in mind when I started. I saw some possibilities along the way and decided to let them flow. I love it.

So it makes me come back to this idea of wasted effort, and whether it really is something to avoid as fastidiously as I’ve always seemed to. If you learn something out of it, is any effort really wasted? Maybe in the end result, effort feels wasted when I’ve tried five different things until I finally got to something that worked. Why didn’t I start with this the first time, I might berate myself. But could I have gotten to the end result without the dead ends? Often, I think the answer is no.

The “wasted effort” is often really just learning. I have to go through it. It’s fodder for future creativity. It becomes the experience I can lean on in the future to get to a specific result, quicker.

I still think I want to be smart about where I’m putting my energy. Doing the same thing wrong the same way over and over again is probably not going to help me or anyone get very far. But if I’m not “wasting” some effort… running into some dead ends here and there… I wonder if I’m not playing it too safe. If everything is predictable, right the first time and wrapped up in a pretty bow, I’m probably not growing quite enough. That applies to my art and my engineering day job… pretty much everything in life.

As much as it pains me to say it, as much as it exhausts me to think about it after a week like this where I just want to curl up and read a good book, I know I want to be working right on that edge. I want to be pushing myself… because that’s when true creative breakthroughs and growth happen.