So, how is it going with capturing Artistic Blur in-camera this week? It’s been a fun exploration for me! I’ve spent a couple of mornings this week working with blur. As I mentioned in the original Exploring with a Camera post… lots and lots of throwaway shots for the one or two good ones. I did get frustrated a couple of times but then I remembered what I told you all, and had to tell myself too!

I spent most of my time playing around with the Slow Shutter Cam app, because I was must successful with getting blur that way. I spend a lot of time playing with getting blur around a mostly recognizable image. To do this, I set my shutter speed to 2 or 4 seconds, held the camera (mostly) still for at least half of the time, and then started moving.

The kind of movement changes the effect. Above, I had a swoosh to one side and must have sat in a new place to get the “ghost tree” effect. Below, I bounced around a bit instead of having a single direction of movement.

The image above wasn’t the final image though. I wanted to show you the in-camera blur (above) but this image was calling for more. So even though we’re focusing on in-camera blur, I want to show you the finished piece with a texture and a frame added. They also add to the soft feel of the image. More on post-processing next month though! 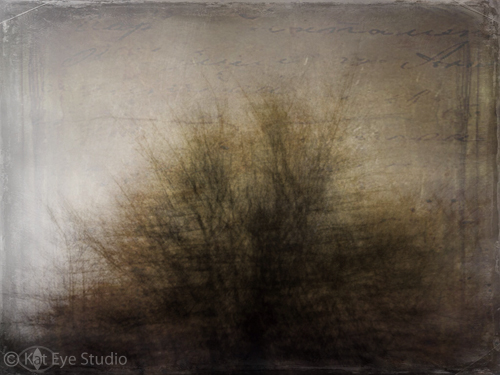 And… drumroll please… I did manage to get out-of-focus blur with the iPhone. Once. It was completely by accident and I can’t do it again! Argh! So I’m still working on that skill. Here it is, straight out of the camera:

How is your exploration of Artistic Blur going? Share with us!