OK, here it is, the window that started off last week’s rainy photowalk. I was drawn to those window frames of wonderfully peeling paint in contrast with the shiny smooth metal of the building. It was interesting to find that the metal wasn’t as shiny smooth as it seemed from the car driving by. It had it’s own texture of rust and even writing on it, as you got closer. I like the shapes and lines in this image, and the contrast of not only textures but the silver-blue building against the warmer yellow and brown found in the windows and doors and repeated in the color of the curb. 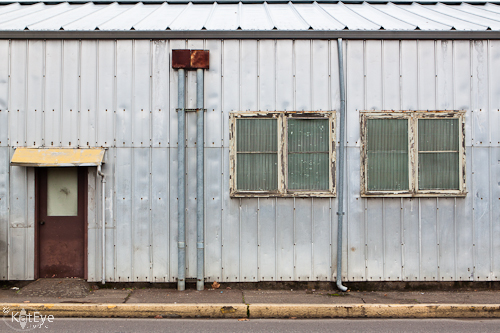 I’ve been noticing lately how “straight on” many of my images are. That seems to be a favorite perspective. It’s not intentional, I often take many different angles and perspectives of one scene but come back to the “straight on” one as my favorite. Maybe it’s a reflection of my personality, I’m pretty direct and straightforward.

But the angles often show something that the straight on perspective cannot, and that’s depth. This is the window on the left. You can’t tell the depth of the texture, borne out through the paint and screen and screws and nails, in the image above. To show that, it took moving around the angle of the camera, the depth of field, capturing the layers and the details. Of the two images today, this second one is my favorite. It has more depth, it reveals more. It says more to me. 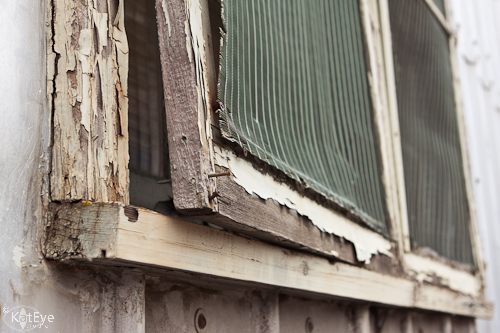 It’s just a reminder to continue looking from all different perspectives, to see which one connects with you the most. You never know!