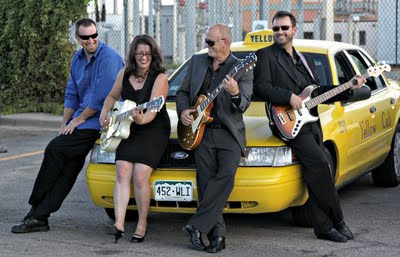 Every once in a while, you get to try something completely, totally new. While in Colorado, I had the opportunity to take photos of a band my brother is in, Cedar Avenue Blues Band or CABB for short. (My brother is the drummer, the tall one on the left, in the blue shirt.)

We didn’t have much time together, and I didn’t have time to scout a location, so I asked them to pick one. They worked it out with the Yellow Cab company to use their lot. We could wander around and take photos anywhere, but nothing would be moved for us. We met in the early evening, as the sun was lowering in the sky. It was hotter than heck and they were wearing these nice clothes.

Can we talk about uncomfortable? I’m usually not a people photographer. Now I had four adults I had to make simultaneously look good. I had a location with lots of distracting background, and light that was changing rapidly. Thank goodness, they were a great group to work with. As we moved around the lot, everyone made suggestions and worked together on ideas. The best idea of all was to have them pull out their instruments and play. Everyone relaxed and started having fun. You can see they are a band, and you can tell they have fun together. Don’t you want to hear them play now, after seeing this image?

What started out as really uncomfortable and nerve-wracking yielded something great. My skills with street scenes and varying light situations worked here as well, but I needed to use them quickly. It was worthwhile to get out of my comfort zone and experiment with a new situation and new subject. As I tell the participants of my Find Your Eye classes, each time you step outside of your comfort zone you expand it a little further. I doubt I’ll head in the direction of taking band promo shots on a regular basis, but at least I know I can get something useful. I’ve learned a little bit more, and my confidence has grown because of it.

In honor of our Process of Elimination exploration going on now, I’m going to share the straight out of camera shot too. When comparing with the image above you’ll note that I did some cropping and exposure adjustments in post processing. In this case, I was trying to get everything in the shot with a “clean” background, with room to adjust and crop later. I was taking a lot of shots as they sang, several frames per second, to get different expressions. It’s amazing how hard it is to get four people looking natural all at the same time!

I also played around with some post-processing, to see what they might like. Their favorite is the color boost. Mine’s the black and white. What’s yours?