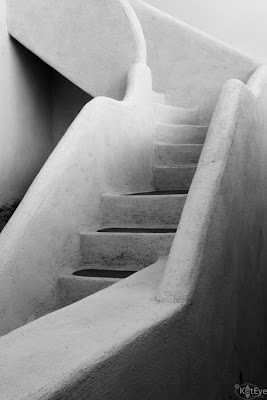 Happy Exploring with a Camera Thursday! I’m so excited that for the next couple of weeks we will be Finding Form in our photographs. While I’ve been exploring form for a while, I didn’t become quite so focused on it until our recent trip to Greece. Today I will explain the idea of form and show you how I use it in my photographs. At the end of the post you will find the link tool to share your own photographs of form, or you can add them to the Exploring with a Camera Flickr pool.

Before diving into examples of form, I’ll show you an example photograph of shape, absent of form. A silhouette is a shape, it has no volume. In the photo below, you can tell that these are people, but you don’t get much indication of the form by the silhouette, only the shape. Contrast that with the lead-in photo of the stairway on Santorini island, in Greece. In the stairway photo, there is dimension and movement. You move through the stairway and can see and feel its dimension – that’s form. 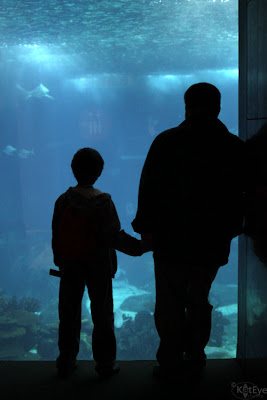 The light you use in your photographs is what expresses form. Do you need direct light or indirect light? What’s best? I found it interesting, as I consulted my photography reference books on this topic,  how discussion of form was either completely absent or contradictory. Only two books even mentioned shape and form as design elements in photography, and those two disagreed on what light best expresses form.
So, in my explorations I looked at images where form was a dominant element and what type of light I was using, to share with you here. My conclusion: The light that best expresses form will depend both on what is available and on what you are trying to convey. Each type of light emphasizes different elements of form: Direct light seems to emphasize planes and edges while indrect light emphasizes curves.
Direct Light
Here is an example of direct afternoon sunlight, on the turret of this church on Santorini. The form is definitely expressed, you can see the dimension of the building through the different faces and the curve of the dome. The resulting form is very planar or angular, however, and the curves are minimized. 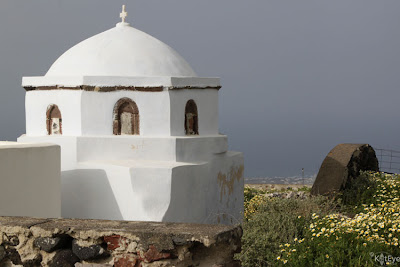 The volume of this carving, from a door found in Cefalu, Sicily, is clearly evident. There is a strong element of shape with the circles but the strong light and shadow gives the dimension of form. I almost want to reach out and touch it, run my fingers along the carved surfaces. 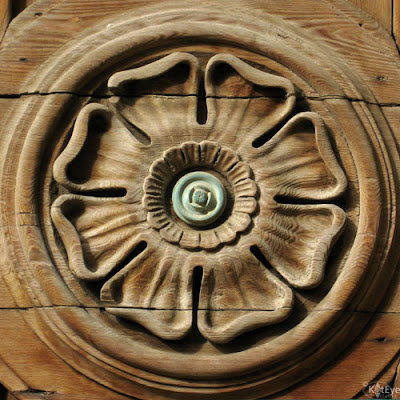 This image of footprints in the sand is all about form. There is really nothing “there” in this image. The photograph is of what is not there, the displaced sand, that the light and shadow highlight. Without the direct light, these footprints would not have the strong dimensional form you see here. 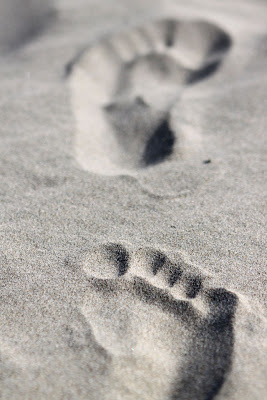 
Indirect light is softer, more gentle; It emphasizes the curves. I love indirect light for the gradations it provides, which serve to show volume. The indirect light on this Canova sculpture in the Louvre is marvelous for capturing the details of the form. Can you imagine this sculpture with a strong front or back light? The depth would be gone. 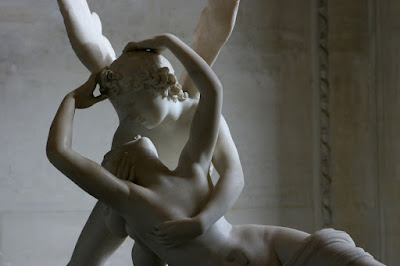 I have completely fallen in love with sculpture as an art, I think because it is pure form. Photography and sculpture have an amazing amount in common – both are about expressing light on a volume. The significant difference is that sculptors create the form from nothing while photographers capture the form that exists. Aren’t we lucky that those of us who aren’t going to carve marble have a way to communicate form?  I think so!

Here’s another example of form, expressed through light on a sculpture. You saw this image of a Rodin sculpture several weeks ago when we explored rim light, but the form is definitely captured by the indirect lighting from both sides. 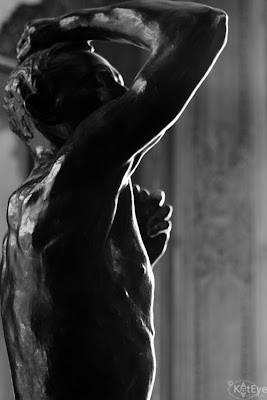 The attic of Gaudi’s Casa Battlo in Barcelona is a heavenly place to capture form in indirect light. This stairway has indirect light from several directions, which serves to highlight the various forms that it is made up of. The gradation of light and shadow give the image a lot of depth and layers to move through. The curves are emphasized. 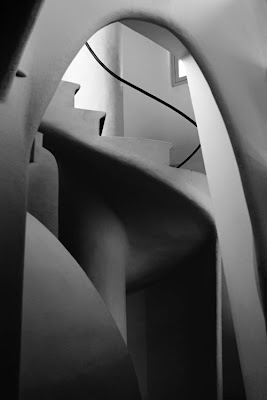 Here is a final example of lighting from Santorini, a combination of both direct and indirect light in this scene. How do you think they work together? What does each type of light emphasize? 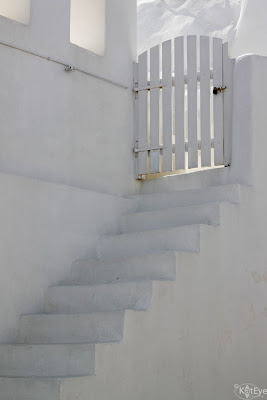 Color
In looking at my photographs that have form as a primary design element, I’ve noticed that they are almost always monochromatic. Removing variation in color helps to focus on the form. This can either be done by converting to black and white, or capturing a mainly monochromatic scene. This street corner in Brescia, Italy is a good example. The form of the buildings is emphasized through the light on the different surfaces. Since both buildings were pink, the image retains a feeling of form as one of the main elements. 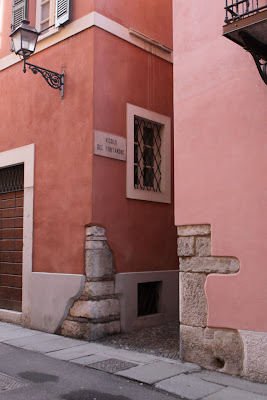 This group of images from Burano, Italy show variation in color when taken together. If you look at each one individually, you will see form as a dominant element in each photograph. These photos also serve as examples of how indirect light works differently than direct light to show form. The curves of the pipes and other elements are emphasized rather than the planes and edges. The indirect light gives a softness to the images, where direct light would give harder, distinct edges. 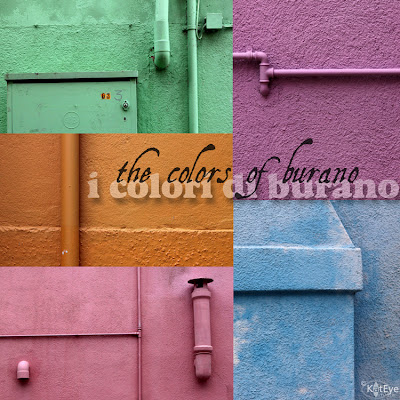 Images don’t have to be completely monochromatic to highlight form, as this photo from Santorini shows. The form of the wall and steps is a strong element in this photo because the colors are softer and don’t compete. 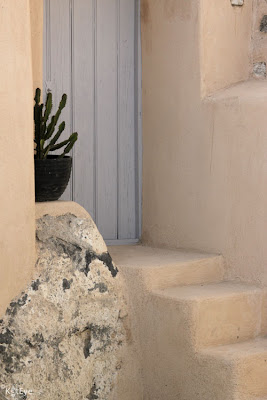 When there is strong color contrast, however, form can recede to a secondary element in the photograph. This image from Burano has a strong element of form, however the strongest design element of the image is color because of the contrast of the bright primary colors. Form takes a supporting role here. 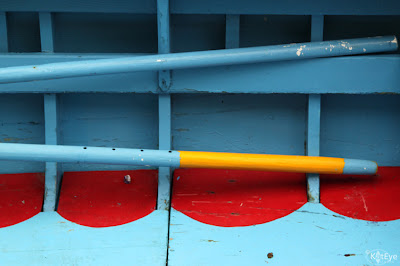 I hope this has helped you to see what form is, and how you can use it in your photographs. Since photography is a two-dimensional expression of our three-dimensional world, finding and conveying form is a way to give our images depth. You may notice most photographs have an element of form in them, but it may not be the primary design element.
Take some time over the next couple of weeks to find form. Natural or man-made, straight or curvy, every three-dimensional object has form. Go through your archives, or explore with your camera, and come back and share what you’ve found with everyone here. I say it every time, but I learn so much through the images you choose to share here! We grow our community knowledge that way. You can link your images in below or add them to the Flickr pool.
Thanks so much for joining me here! Have fun exploring!

FYI – Links will be moderated. Please ensure that your linked image is on topic, and include a short explanation of how it relates to the current theme. Link back to this site through the Exploring with a Camera button (available here) or a text link. Thanks!